In early 1969, there was a split in the club. At the Annual General Meeting that year, a number of club members attempted to take over the club and have it disbanded. A vote at the meeting was taken, and on a show of hands it appeared to be equal. A card vote was taken and it was agreed to continue the club. Obviously there was a problem and the dissenting members went to the Officer Commanding RAF Woodvale and got him to agree to suspend flying by the club until it was sorted out. It seemed that five members of the split faction had secretly formed a company to take over the assets of the club at Woodvale so the two Cessnas were quickly flown out to Liverpool until the matter was concluded. The agreement of the Commanding Officer was needed to fly the aircraft out, which was granted. 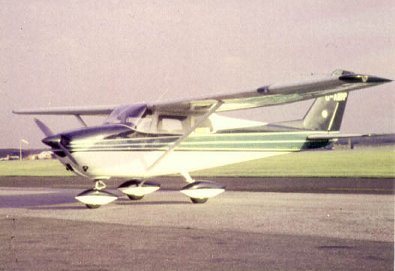 G-ARMP in its original colour scheme

Operations commenced at Liverpool, but with only half the former members. Despite strong objections from one of the existing resident clubs there, the Southport Aero Club commenced operations at Liverpool, initially operating the two Cessnas, G-ARMP and G-ATNX.

We now had to re-establish ourselves in numbers and attract more locally based fliers, as in the past most had come from the Southport and surrounding areas. We took over the old British Eagle canteen (at the old Airport site - now demolished) as our clubroom, but as a member's club and with no full time staff it was difficult to run in competition with Keenair and Cheshire Air Training Services (CATS) on the flying training side. After some time we realised we were not flying sufficient hours in each aircraft to justify them and that one had to be sold. We discussed at length in committee which way the club should go and in the end decided to give up training and offer the 172 as a machine for pilots who already had a license who found it difficult to hire a four seat aircraft on the airfield for touring purposes. G-ATNX was sold in February 1972, and we achieved over 400 hours in G-ARMP in that year, a creditable figure remembering that we were operating entirely on voluntary labour.

We also found difficulty in manning the club premises and eventually gave these up as they did not justify the effort and expense. So we began, as we do now, operating the aircraft without premises. We hangared the aircraft with Vernair for some time and also with the Airport in the large hangar. In the mid 1970s G-ARMP had a complete strip and repaint, with the interior re-upholstered and carpeted, and new radios were installed. The clubs modus operandi was popular with pilots because we operated, as now, in a manner where pilots could take the aircraft away for up to a week at a time and only pay for the actual hours flown rather than a minimum daily rate which applies at most clubs. This enabled members to go as far afield as Spain, the South of France, etc.

G-ARMP after its repaint
Mr. 0. P. Roberts, who had been the Chairman of the club for some time retired from active flying and was elected as our President, a post he held until ???. He kindly presented the club with a Silver Salver which is won each year by the member who flies the greatest distance from Liverpool as measured in a straight line. The trophy is awarded at the A.G.M. and the winner holds the trophy for the year. Another fine trophy, an excellent oil painting of G-ARMP, is awarded to the pilot who flies most hours in the year with the club. For some time now this painting has been hanging semi-permanently on the wall at Terry Stelfox's residence.
In 1979, the club was formed into a limited company as a legal safeguard and although there was no change internally, the club was formed into "The Southport & Merseyside Aero Club (1979) L td." It was, and still is, a member's club and there is an elected committee and officers who attend to the day to day running of the club on behalf of the members. It is now over 50 years since the club's formation, and through many ups and downs, flying and political, it now remains the only flying club in the North West run by the members rather than a proprietor.

During the early 1980s we suffered, as many clubs did, the reduction in flying due to the heavy increase in costs all aircraft operators had to bear. This decline in flying hours achieved made us look hard to our expenditure and one item we could no longer bear was the expense of hangarage. To this end we vacated the hangar at the northern airfield and tied the aircraft down on the spur taxi track near to the link. Unfortunately, the aircraft was blown up onto a wing and propeller during a gale and was rendered unfit to fly. It proved uneconomical to repair with our limited finances and so was sold. The aircraft continued to have an unfortunate life under the stewardship of its new owner (see below) and it was eventually broken up for spares.

We then had a period of, once again, being a club without an aircraft even though we now had a substantial sum of money on deposit in the bank. There was a proposal at the AGM in March 1988 to have the club dissolved and the money distributed. This was defeated by the members present and many members volunteered to loan the club sufficient money between them to bring the funds up to a sum that would purchase another aircraft. This was carried and the club again began looking for a suitable aircraft.

Eventually another Cessna 172 G-BFJV was purchased from Shobdon, which commenced flying with the club in July 1988 and, with an advertising campaign in "Pilot" magazine, proved popular. Membership increased and flying hours achieved began to show great promise once again. New radios were fitted to the aircraft and it was the intention very soon in 1991 to have the interior refurbished. However, on 28th September 1990 when being taxied around a disused perimeter track the aircraft struck two metal posts under power and suffered extensive damage leading to it being written off.

G-BFJV
Yet again we were a club without an aircraft but in 1992, we were fortunate indeed in purchasing our present aircraft, a Cessna 172N G-GYAV. It was in immaculate condition, being only 3 years old, and a delight to fly. Since then, the club has averaged 200 hours or more per year in Alpha Victor, although she too has had a couple of minor mishaps. She is regularly taken on considerable trips, for example the Scottish Isles, the Isles of Scilly and northern France, the Isle of Man, Dublin and Galway to name just a few.

G-GYAV shortly after her aquisition in 1992 outside Hangar No. 5 of the old Liverpool Airport