The Southport Aero Club was formed on the instigation of two Southport men, Mr. Eric Baker and Mr. Henry Harker. The inaugural meeting took place at the St. John Hall, Southport in July 1951. Messrs. David Vernon, Wilf Bold, Cyril Clumpus also attended the inaugural meeting with others who did not join, and together the five men formed the initial membership. Plans were made to purchase an aircraft and the Club was admitted to membership of the Popular Flying Association as Group No. 62.

Eric Baker had been in the Civil Air Guard at the beginning of WW2 and flew various aircraft: - Moth Minor, Lysander, etc. Henry Harker had worked for Norman Giroux on his Southport beach pleasure flying during the summer months. David Vernon had learned to fly with Wright Aviation at Hooton Park and Woodvale during 1947 and went on to join the RAF flying Tiger Moths, Harvards and then Gloster Meteors, being posted to 257 Sqdn. at Horsham St. Faith in 1950 before being demobbed in 1951. The other two were not pilots but were keen to learn.

The club was unable to gain permission to operate at RAF Woodvale and Mr. Giroux felt that the beach airfield at Hesketh Park was not suitable for flying training. During this period members who wished to fly did so either at Liverpool or Blackpool using aircraft at these bases. The committee decided to approach the Ministry of Aviation at Grove Park Liverpool for their views on the impasse over use of an airfield and their verdict was that it was a Licensed Airfield and therefore open to any aircraft. So permission was finally given for the club to operate there. At this time, the club appointed Mr John Formby as Chief Flying Instructor who was employed at that time flying the Spitfire "Thum" Met. flights out of Woodvale. Early in November 1955 the committee of the club, along with Mr. John Formby went to Honiley to look at a Tiger Moth G-ANOD, which the club bought for £250.

David Vernon went to Honiley to fly the Tiger Moth up to Southport, but fog developed and he made a precautionary landing in a field near Wrexham. The aircraft was secured for the night to a telegraph pole with a policeman on guard. The next day the CFI Mr. Formby came to the aircraft and flew it back to Woodvale. 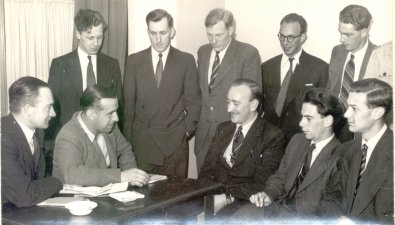 The Inaugural meeting of the Southport Aero Club in July 1951

From the following month, we operated off the beach training pupils to fly and a number were sent solo.

There was an incident on 27th May 1956 when an instructor was flying with a pupil. The aircraft was over the beach when severe vibration commenced. It was so bad that the instructor had to completely throttle back and carry out a "dead stick" landing, fortunately on the beach strip. A spark plug had come out of the cylinder and of course complete compression was lost on one cylinder causing the vibration. The plug was reinserted, tightened up and flying continued. The aircraft had only just come off a 50 hour check and obviously the plug had never been properly tightened up. 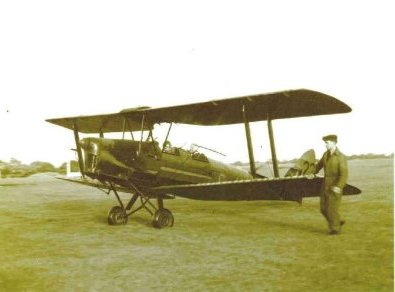 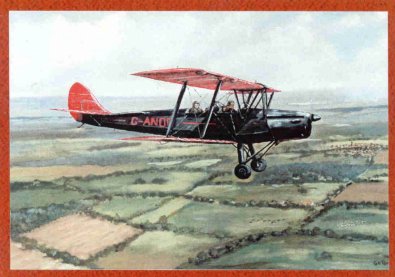 An oil painting of G-ANOD is the only definitive information about her 1950's livery, described simply as "Red and Black" in this article about the 1956 Kings Cup, in which she took part. 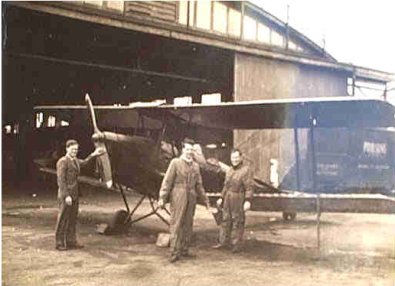 We started out charging 45 shillings an hour (£2.25) but this soon had to be increased to cover costs. The club prospered and considered operating a second aircraft which would be an enclosed cabin type and suitable for touring. To this end we purchased a Foster Wickner Wicko G-AFJB in September 1956.

In 1959 the club borrowed an Auster, G-AJIH, from Barrow-in-Furness which was flown for a short time. Early in 1960 the Tiger was due for a C. of A. renewal and with the ravages wrought on it by the beach landing strip, needed a lot of work. Unfortunately, the club could not afford this cost and sadly the Tiger Moth was sold for the princely sum of £109. 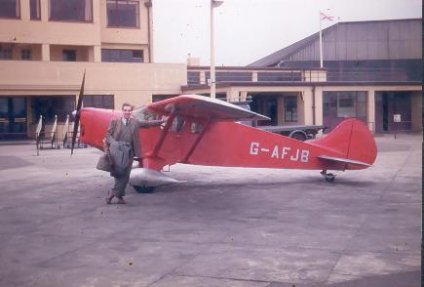 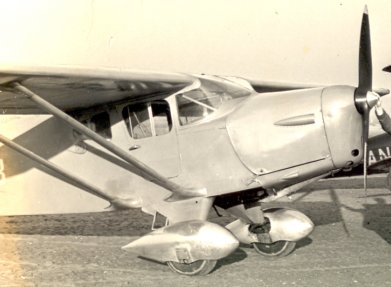 The Foster Wickner Wicko G-AJFB which the Club operated throughout 1956-59 and is currently (2004) under restoration by Ron Souch in Hampshire. It is the sole remaining example of the type, of which just eleven were built.
The club was now without an aircraft and members then commenced going over to Blackpool to fly there mainly with Air Navigation and Trading Co. Aircraft flown at this time included Chipmunks, G-AOJY and G-APPK, Jackaroo G-AOIO, Auster G-AGVI, Miles Monarch G-AFLW, Autocar G-AMMZ, Hornet Moth G-AEWY and Piper Colt G-ARJF.

During the period when we had no aircraft we had decided that it was no longer possible to operate off the beach as it ruined the aircraft. We made representations once more to the Commanding Officer at Woodvale who recommended to MOD and the Air Ministry that we should be given permission to operate out of Woodvale.

They agreed, and we trialed a Forney F1A Ercoupe, G-ARHA, from Air Rent Ltd., and agreed to lease one with a guarantee to fly or pay for 200 hours in the first year. So early in 1961, the club leased a brand new Ercoupe G-ARHC. It was insured by and all checks were the responsibility of Air Rent. All we had to do was fuel it and hangar it so our costs were fixed. We found the Aircoupe an excellent aircraft, and it never let us down. We exceeded the 200 hours in the first year operating out of Woodvale, and the arrangement was the making of the club financially. 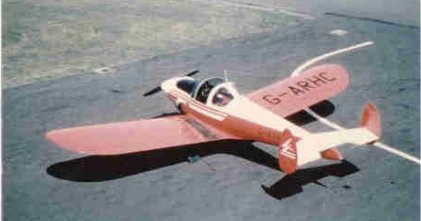 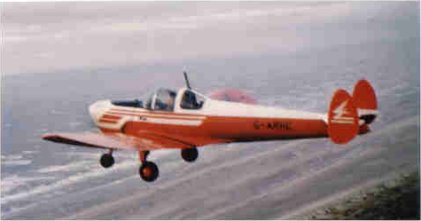 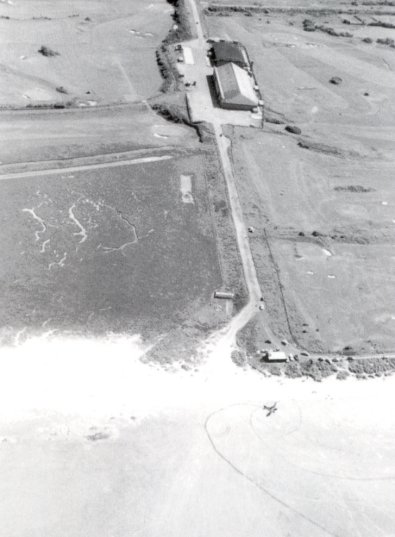 Hesketh Park Beach Strip and hangars
During this time we occasionally had a second Ercoupe loaned to us by Air Rent, both G-ARHA and G-ARHB being used. We also had G-ARXS for short time. These were lent to us whilst G-ARHC was undergoing a C. of A. renewal and on one occasion having a new wing fitted when the aircraft hit a large seagull on the approach into Blackpool and bent 4ft of the wing. For the second year Air Rent asked us to guarantee 300 hours, this we did and achieved it.

In early 1965 Air Rent asked us to guarantee 400 hours in the year, but the club felt it could not attain this figure.The club was offered the Aircoupe to buy for £2,750, but the club declined and G-ARHC was returned to Air Rent at Sywell on 6th March 1965.

Forney F1A Ercoupe G-ARHC
on the day it was delivered to the Club in 1961
Dave Vernon remained a lifelong enthusiast for the Ercoupe, as demonstrated by the story of his ownership of two of them, G-AVIL and G-BKIN and also the Ercoupe derivative, the Mooney Cadet G-BTOJ.  There are several websites devoted to the type, including a UK site 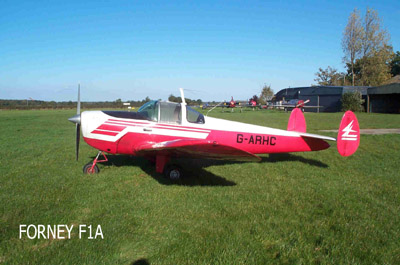 G-ARHC at Little Gransden 2006
The two pilots which took the Ercoupe to Sywell flew back the same day in a Piper Colt G-ARST which was to be our new club aircraft. The Colt was operated at Woodvale through to 1966 and a Piper Tri-Pacer G-APTP was borrowed for some weeks when the Colt was having a new engine fitted.

At the end of that year the Colt was sold, and replaced by a Cessna 172B G-ARMP. G-ARMP was operated throughout 1967 and the club attracted many new members who wanted to learn to fly. The 172 was really not the machine for this role so the club bought a Cessna 150, G-ATNX for training which released the 172 for touring purposes. In early 1968, the club was busy enough to borrow the Tri-Pacer G-APTP again. 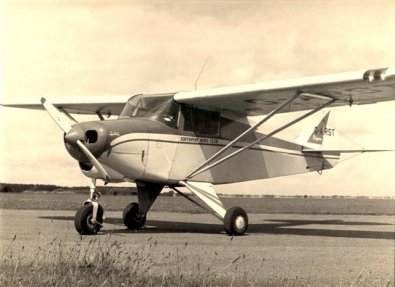 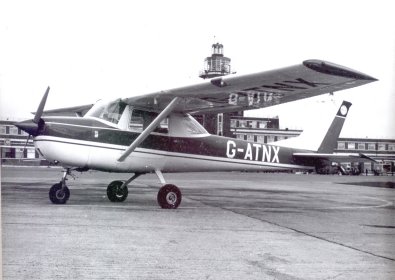 One of the club's founder members was flying at that time as a Captain with Cambrian Airways based at Liverpool on Viscount 700's. On 26th April 1969 the club chartered a Viscount from Cambrian Airways to attend the Isle of Man Jurby Air Rally and our member captained the flight with First Officer Sam Hardy who also instructed with the club from time to time. Some 63 Club Members filled the seats of the Viscount and paid £5 each for the round trip and the day out. The Viscount made a fly past during the rally with all our members aboard. 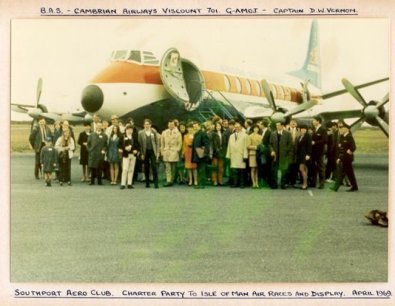 You'd never be allowed to do it today! - The Club's chartered Viscount at Jurby, Isle of Man 26/04/1969, Captain Dave Vernon far right

Founder members of the Southport Aero Club, in co-operation with Sefton Council's Coast & Countryside Service have erected a memorial at the site of Hesketh Park Beach Aerodrome used by the club between 1956 and 1960. Lord Fearn unveiled the memorial with three of the original club members in attendance, John Mulliner, Quentin Jones and the late David Vernon (seen below with the plaque mounted on its stand).

John Mulliner is Chairman of the Southport Shoreline Interest Group, and has recently published a book on North-west flying, SUN, SAND & SILVER WINGS 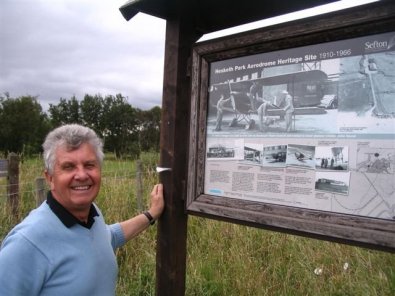 Nigel Sleigh visits the Club's "Ancestral home" 2008. Most of the scenes depicted on the memorial are included on this page and are from Dave Vernon's archive 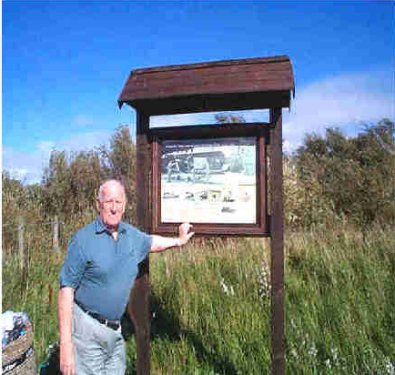 Dave Vernon at the unveiling of the memorial, 2004