Over a period of years, Foster Wickner Wicko G-AFJB, one of the two aircraft with which the Southport Aero Club started flying, has been brought back to life by Joe Dible and Ron Souter. It has been completely rebuilt and painted in its original colours as delivered. This magnificant effort has saved an historic aircraft, the only remaining one of the eleven built pre-war. It is expected to fly in the summer of 2005. After this costly and perfect restoration, it looks in far better shape than when we subjected it to rather a hard life on the beach in the 1950's. This aircraft has had a most remarkable life which started even before we owned it and has continued long after it was our pride and joy all those years ago.
Read the full story at http://www.wicko.com 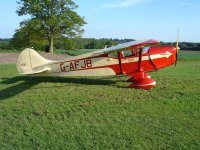 2004 and the aircraft begins to look once more like an aircraft.

The scrap man wouldn't want it! On the way to restoration.

Pictured here at White Waltham in 1955. After going from SAC to Yorkshire, G-AFJB spent many years in storage in the West Midlands.

At Ron Souch's workshop at Southampton on 6th March 1999.
Picture courtesy of Aeroplane.

Known in wartime as a "Warferry", the Wicko was repainted in 1970 in camouflage as DR613, a wartime hack for the Air Transport Auxiliary.

An early colour picture of JV. The pilot is John Cairns, but does any member know which Airfield?

At Southport, 1956. Southport Aero Club flew Juliet Bravo off the beach together with Tiger Moth G-ANOD.

In Southport Aero Club ownership, seen here at Hawarden, 1956. The Wicko was sold in 1958 and went to Yorkshire.

With Dave Vernon and his wife at Walney Island 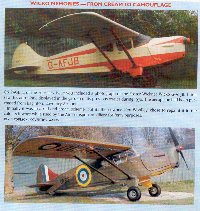 Thanks to Dave Vernon for the SAC photographs and this summary of the Wicko's story. Other photograph sources acknowledged or from the Wicko web site.